The Great Depression brought factory layoffs and economic failures to Barberton, where half of the city's sage earners were out of work. The city's industrial base was strong enough, however, to emerge from the Depression with its most important industries intact. An important event in 1932 was Babcock and Wilcox's decision to make its Barberton Works the company's chief fabricating plant, producing both marine and stationary boilers. In 1938, Barberton's major industries remained very stable, including the Diamond Match Co., Columbia Chemical (PPG), Babcock and Wilcox, Seiberling Rubber Co., Sun Rubber Co., Ohio Brass, Pittsburgh Valve and Fittings Co., and Yoder Bros. The city employed some 10,000 workers in that year.

Working conditions and wages were very poor, however, and Barberton workers responded by organizing walkouts and strikes with a solidarity that came to characterize the city's labor force. A Diamond Match strike of March, 1933, was the first walkout of any importance in the Akron area since the Industrial Workers of the World called out the rubber workers in 1913. The Barberton Council of Labor was formed in 1933 as an umbrella organization for the city's unions. A PPG strike in 1936 marked the beginning of a long history of labor disputes in Barberton. In 1951, Barberton ranked seventh in Ohio in work stoppages.

Barberton's population increased by less than 100 people during the decade of the 1930s, an indication of how the Depression had slowed its growth. As a result, little new housing stock was apparently built. Nevertheless, the community continued to see some important new construction during this period.

The Barberton community took advantage of some of the federal relief programs which were instituted during the Depression era. Projects sponsored by the Federal Emergency Relief Administration and the WPA included improvements to Lake Anna, Crisman, Edgewood and Tuscora Parks in 1934-36. The Federal government built a new downtown Post Office in 1932, a brick-faced landmark building which was embellished in a Neo-Classical Revival style. Other buildings of the 1930s reflected a trend toward simplified designs that evolved from the Art Deco and Art Moderne architectural movements of the period. Included are the 1931 Eagles Hall, 1934 Elks Lodge, and the 1934 downtown commercial buildings which housed the People's Drug Store and Woolworth's. In these buildings, form and ornamentation are "streamlined" and terra cotta is often used as a wall surface, sometimes in geometric or stylized designs. The Elks Lodge provides a particularly good example of an Art Deco influence executed in terra cotta. A significant entertainment facility built in downtown Barberton in the late 1930s was the Lake Theater and Recreation building, completed in 1938. Housing a movie theater, bowling alley, billiards room, restaurant and other retail space, this facility also reflected a modernistic, streamlined character. 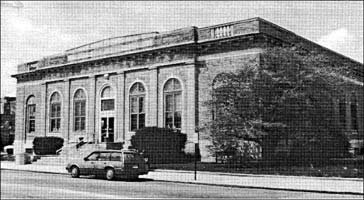 Barberton's development was dramatically influenced by World War II. Production requirements during the war years stimulated several of Barberton's industries. Defense contract work brought an increase in production and employment for Babcock and Wilcox, which produced the majority of all boilers used in the navy and Merchant Marine during the war. Seiberling Rubber's wartime employment peaked at 2,600 in 1946. PPG's Columbia Chemical remained a very strong Barberton industry, with employment numbering approximately 2,000 in 1952. The post-war period also saw the beginnings of the B and C Machine Company, an industry which has grown to become a major Barberton employer today. In addition, Rockwell International opened a plant in Barberton in 1951. Babcock and Wilcox built a new multi-million dollar office building on Van Buren Avenue in 1955. The Diamond Match Company reached a record peak of $133 million in sales in 1956.

Following WWII, residential development in Barberton picked up, undoubtedly spurred by the community's post-war economic prosperity. Barberton's population again began to increase, from 24,028 in 1940 to 27,820 in 1950. Ten years later, in 1960, Barberton had a population of 33,805. Annexations of developing land began anew during this period, as a result. In 1943, 224 acres of the former Anna Dean Form were added to the city; in 1956 another 375 acres of the A.O. Austin estate, including the Barber Mansion, were annexed. Also during the 1950s, Norton Township land to the south of Johnson's Corners was annexed to Barberton in several sections. Homes that were constructed during the postwar period reflect a trend toward mass production in housing, with an emphasis on small scale and efficient construction. More working people than ever before were beginning to buy or build their own homes. Large numbers of simple frame or brick-faced one- and two-story homes are located in some of the later residential areas of Barberton. East Barberton, slow to develop during the teens and twenties, was built up rather quickly with these types of homes during the 1940s and 50s.

The prosperous decade of the 1950s resulted in several new community facilities in Barberton. Lake Anna was the location for a new Barberton Municipal Building, completed in 1954, and new Barberton Public Library, dedicated in 1957. Also in 1957, a new Barberton Citizens Hospital was opened in its current location adjacent to Tuscora Park. The new schools of U.L Light and Decker were opened in 1953 and 1956.